Since the Duchess of Sussex returned to the U.S. she has made a handful of appearances by video discussing issues close to her heart. And today, Meghan gave what are perhaps her most personal reflections so far on her experience of living through these troubled times and her hopes for using her voice.

The Duchess turned interviewer to speak to cofounder and CEO Emily Ramshaw for the launch of news organization The 19th*, which was founded to “shine a light on the unfinished business of the 19th Amendment and empower women.” However, Ramshaw didn’t miss the opportunity “turn the tables for a minute” to ask Meghan for her feelings in the 25-minute discussion. “I’m curious what it’s been like for you coming back to the United States in this moment, as a biracial woman in this moment of all these conversations around race and justice. What has that felt like for you?” she asked.

Pointing out how she had been living away from the U.S. for almost 10 years in Canada and the UK, Meghan said: “To come back and to just see the state of affairs, I think at the onset, if I’m being honest, it was just devastating. It was so sad to see where our country was in that moment.”

But, she added: “If there’s any silver lining in that, I would say that in the weeks after the murder of George Floyd, in the peaceful protests you were seeing, in the voices that were coming out, in the way that people were actually owning their role and acknowledging their role that they had played, either actively or passively, in the discrimination of other people, specifically of the Black community, it shifted from sadness to a feeling of absolute inspiration, because I can see that the tide is turning.”

The Duchess said that it was not new to her to see “this undercurrent of racism and certainly unconscious bias,” but added, “I think to see the changes that are being made right now is really—it’s something I look forward to being a part of.” And in an indication that she had felt stifled by the conventions placed on members of the royal family not to speak out on issues that could be deemed political, Meghan continued: “And being part of using my voice in a way that I haven’t been able to of late. So, yeah, it’s good to be home.”

The Duchess also shared her thoughts on the importance of voting. “When I have these conversations about encouraging people to go out and vote, I think it’s often challenging for men and women alike certainly for people to remember just how hard to was for people to get the right to vote. And to be really aware of not taking that for granted. I look at that, my husband for example, he’s never been able to vote. And I think it’s such an interesting thing to say the right to vote is not a privilege, it is a right in and of itself.” While technically all royal family members can vote, by convention the Queen doesn’t and it is generally assumed that other senior royals follow suit.

A source close to Meghan today told T&C that The 19th*’s mission to build a “diverse and representative newsroom immediately spoke to The Duchess and her desire to see more equitable coverage of women and people of colour in the news.” The 19th is non-profit and non-partisan and aims to have gender equity and diversity at its core. Other speakers at the summit included Senator and Democratic Vice Presidential Nominee Kamala Harris; former Secretary of State Hillary Clinton; Melinda Gates; Stacey Abrams; Senator Tammy Duckworth; and Meryl Streep.

During the conversation, Meghan also spoke about trust in journalism and who has the influence. “If it’s only coming from a patriarchal lens, how that shapes everything that we see,” she said, adding: “What’s so fascinating, at least from my standpoint and my personal experience the past couple of years, is the headline alone, the clickbait alone, makes an imprint. That is part of how we start to view the world, how we interact with other people. And I think there is so much toxicity out there in what is being referred to, my husband and I talk about it often, this economy for attention.” 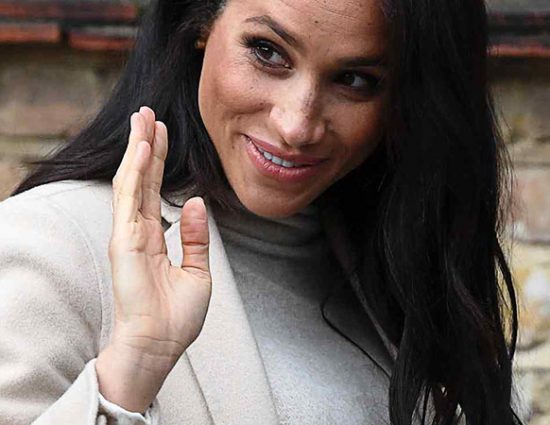 January 16 – The Duchess of Sussex Visits The Mayhew
Prince Harry and Meghan Markle to Host ‘Time 100’ Conversation
Meghan Markle and Prince Harry Take the Stage at One Young World Summit amid Return to the U.K.