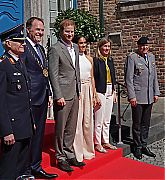 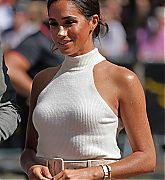 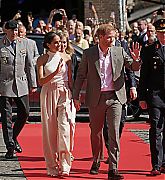 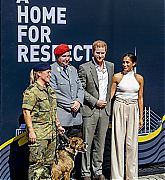 Prince Harry and Meghan Markle are already fired up about next year’s Invictus Games!

The Duke and Duchess of Sussex stepped out in Düsseldorf, Germany on Tuesday for the Invictus Games’ One Year to Go event.

Harry, 37, and Meghan, 41, walked a red carpet hand-in-hand and were greeted by local officials at city hall. The couple also made sure to give a few pets to a service dog named Loki, who was sporting an Invictus Games bandana — after all, the animal lovers have three dogs at home in California, including their newest member of the family, Mia.

The German hub was first announced as a future host city for the Invictus Games — Harry’s international adaptive sports competition for injured, sick and wounded service personnel and veterans — in 2020 with the event initially set for 2022. However, when the coronavirus pandemic delayed the 2020 Invictus Games in The Hague, the Netherlands until 2022, preparations for Düsseldorf were also bumped back.

Now, the Invictus Games are finally set to commence in the German city from September 9 to 16, 2023.

A cause close to his heart, Prince Harry launched the Paralympic-style sports tournament in 2014 after attending the 2013 Warrior Games in the U.S., inspired by the transformative physical, psychological and social powers of sports for those who have served.

“The word ‘invictus’ means ‘unconquered,’ ” the Invictus Games Foundation explained in a statement. “It embodies the fighting spirit of wounded, injured and sick Service personnel and personifies what these tenacious men and women can achieve post injury. The Games harness the power of sport to inspire recovery, support rehabilitation and generate a wider understanding and respect for those who serve their country.”

At the most recent Invictus Games, the prince exclusively spoke with PEOPLE about how the competition and its mission changed his life.

“Life is full of extraordinary gifts and challenges, many that can be seen as lessons,” the Duke of Sussex, 37, told PEOPLE exclusively. “Over time, I’ve learned that how we mentally approach and react to the ups and downs — those gifts and challenges — is what helps to define our own outcome.”

Attending Invictus for the first time as a husband to Meghan Markle and father to son Archie, 3, and daughter Lilibet, 1, Harry touched on how the event felt different after so much in his personal life had changed.

“There is nowhere you can feel more embraced and supported than with the Invictus family,” he said of the Games, which he attended with Meghan. “The Toronto Games were our first time out and about publicly in an official way. We were dating at the time, so it was a lot to take in, but fortunately, we were with the perfect community for that.”

“Now, five years later, here we are in The Hague at the fifth Invictus Games, as parents of two, and living in the U.S.,” he added. “I had always wanted to share these incredible moments with someone special, and to have Meg by my side means everything.”

Harry and Meghan are in Europe this week for a series of charitable events. They kicked off the trip in Manchester, England on Monday for the One Young World Summit and are expected to return to the U.K. for the Well Child Awards on Thursday.
Source: https://people.com/