Harry, Duke of Sussex and Meghan, Duchess of Sussex attended The Endeavour Fund Awards at Draper’s Hall in London, England. Meghan fist attended the awards last year while engaged to Harry. The awards recognize the significant achievement of nine members of the Armed Forces Community who were injured or fell ill in service, but have gone on to use sport and adventurous challenge as part of their recovery and rehabilitation. The Endeavour Fund, led by The Duke of Sussex and The Royal Foundation, provides financial backing and guidance to programmes and charities across the UK that support thousands of service personnel and veterans reach their full potential. There are three nominees for each award that have been chosen from a long list of applicants. The Duke and Duchess of Sussex chaired the judging panel which has decided the final winners, who were announced at the Endeavour Fund Awards ceremony.

Upon arrival Harry and Meghan attended the pre-ceremony reception where they met the nominees, as well as endeavour participants and key supporters of the Endeavour Fund. At the ceremony Meghan presented the award for Celebrating Excellence Award to Nathan Forster, before presenting the award Meghan said: “I’m so, so grateful to be back. Last year was my first time coming and it was such a meaningful night. Before the reception Harry and I were talking to all the nominees and in speaking to one of them he said, you know after I mentioned to him, ‘Gosh the impact you guys make is huge. It’s so much bigger than you.’ No it’s not about us, it’s the ripple effect. And, in true modesty of all the nominees; yes it is about the ripple effect. What I admired in him – and I feel is true about all the nominees – is you don’t have that ripple effect unless each of you is brave enough to make that first wave. It’s so important to remember that because what you’re doing is inspiring so many people – so thank you from all of us for being that inspiration.” 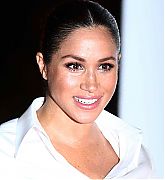 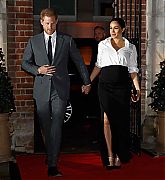 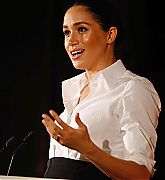 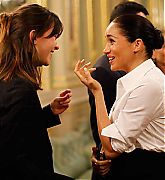