Sometimes, social media can be used for good. While Meghan Markle has been on the receiving end of some horrendous online abuse since becoming a duchess, it seems that some kind-hearted folk have decided to pay it forward in her honor instead.

Royal commentator Omid Scobie revealed that several charities that Meghan is involved with have been receiving donations in honor of Meghan and Harry’s baby. Scobie tweeted, “Proof that social media can be a positive place. Charities including @themayhew @Camfed and @WellChild have been receiving donations from Duchess Meghan fans around the world who started the hashtag #GlobalSussexBabyShower to celebrate Baby Sussex’s impending arrival. Very cool.”

As Meghan has faced quite so much abuse online and in the press since she married Prince Harry, it’s heartening to know that social media can actual have a positive impact, too.

Back in March 2019, Meghan took part in a panel for International Women’s Day at King’s College London. The duchess revealed that she tries to avoid social media saying (via ITV News), “I don’t read anything, it’s much safer that way, but equally that’s just my own personal preference, because I think positive or negative, it can all sort of just feel like noise to a certain extent these days.” But hopefully, the donations made in honor of #GlobalSussexBabyShower will show Meghan that she has a lot of supporters worldwide, too.

In her first engagement of the day and her first visit as Patron, The Duchess of Sussex visited Mayhew. The Mayhew is an animal welfare charity working to improve the lives of dogs, cats and people in communities both in London and internationally. Meghan met with volunteers and residents who have used some of the Mayhew’s services including The TheraPaws Program which uses volunteers and their therapy dogs to go into care and residential homes, hospitals, hospices and day centres across London to engage with residents, provide companionship and brighten up their day and the Mayhew’s Pet Refuge, which provides shelter and care for the pets of people in crisis for short periods of time, like being hospitalised. The Duchess chatted with Afghanistan Country Director, Dr Mo, to learn more about the Mayhew’s work abroad and Head Vet Nurse, Gillian Rich RVN, who spoke about the veterinary work they do on-site at the Community Vet Clinic. Ever the animal lover Meghan was smitten with several of the dogs who either have been adopted from the shelter or looking for their forever homes. We’re sure they won’t be looking for long now! 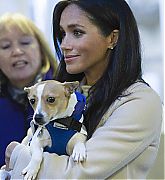 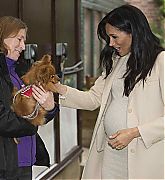 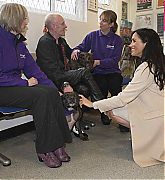 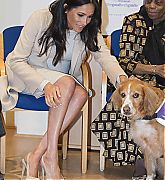