WOMEN & EDUCATION: Their Royal Highnesses visited the University of the South Pacific campus in Suva, where they observed a cultural performance on the effects of climate change, before meeting students studying subjects from agriculture to women’s development. The event was streamed to a number of the university’s campuses throughout the Pacific region. The Duke made short speech in his capacity as Commonwealth Youth Ambassador, and The Duchess announced two new grants awarded to the University, which will allow them to run workshops to empower female staff and to support students during their education. They will be provided by Her Majesty’s patronage. Kensington Palace had reported before the tour that Meghan would say a few words, but no one was ready for the powerful speech she gave about her own college experiences, and the right for young girls and women all over to further their education. You can watch Meghan’s full speech below: 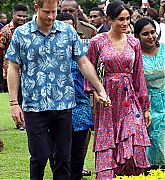 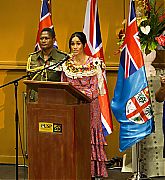 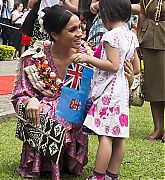 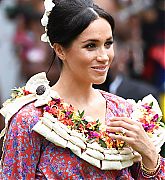 MARKET SHUTDOWN: Afterwards, The Duchess attended a morning tea at the British High Commissioner’s Residence to showcase women’s organisations which operate throughout Fiji. In particular, Her Royal Highness heard more about a UN Women’s project, ‘Markets for Change’, which promotes women’s empowerment in marketplaces throughout the Pacific. The Duchess then traveled to Suva Market to meet some of the female vendors who have become empowered through the project. Unfortunately, Meghan’s trip got cut short due to a “security risk”. A Palace aide told The Telegraph:

“Kensington Palace indicated the decision to leave early was down to security concerns. She was scheduled to spend 15 minutes at the market, but had to leave after around eight minutes. A palace aide said: “It was hot, humid and uncomfortably busy and there were far larger crowds than expected. She met everyone she was meant to meet and left. “There would have been a lot of people who would have been keen to meet her but she did meet those who had hoped to. On advice she was taken out due to crowd management issue.” 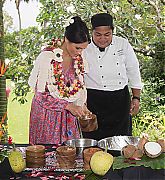 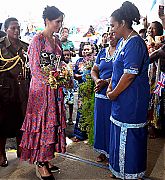 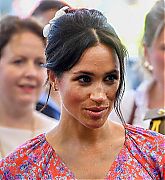 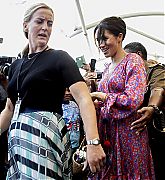